Colin Muller laments the rise of the Nimby

During August, Colin Muller, chief executive at Muller Property Group, shared his views on the negative impact Nimbys are having on land development in Farmers Guardian.

The ‘not in my back yard’ phenomenon has grown out of the introduction of the Localism Act in 2011.  It was intended to encourage local people to participate in the future development of their communities.

Colin argues that, far from encouraging growth, it’s being used as a ‘charter’ for preventing change.  Nimbys make land promotion hard work as, Colin says, they “delight in objecting to anything that’s new, especially housing”.

Not only are Nimbys preventing essential progress for future generations, but local councils are frightened to death by their mob-like form of attack at council meetings.

Colin sees Neighbourhood Plans as an opportunity to plan in-depth for the next 30 years – but one that’s being missed because of Nimby protest.  Colin doesn’t pull his punches when he says:

“In the thirty plus years I’ve been involved in town planning, land use and development, I’ve never seen a more negative, unhelpful and protectionist attitude toward planning the future of communities by locals.”

Colin points out that the protestors are all too often a tiny minority of people, often retired people resisting change.  He argues that the most important people to consult with are surely the working population who will benefit from any change.

Colin advises farmers and landowners who are considering developing a piece of their land to get involved with their Neighbourhood Plan as early as possible, and to contact a strategic land promotion company like Muller. 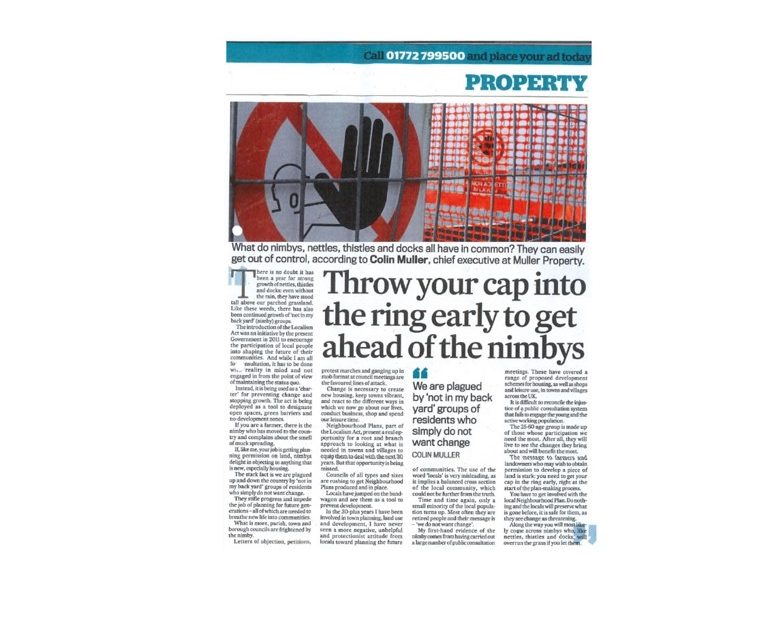