Muller Property Group has been making headlines recently after revealing some disturbing facts about Cheshire East Council’s interpretation of its own housing figures.

The local authority put out a press release claiming credit for granting permission for more than 20,441 new homes, and stating that housing completions have ‘risen year on year’.

However, an investigation by Muller revealed that of the 20,441 homes given the green light, at least 4,300 were actually granted on appeal – meaning that the Council spent millions fighting against them.

In the past eight years the Council has racked up a deficit of 5,365 homes against the OAN target, and according to its own Housing Monitor Update report this is due to ‘persistent under delivery of dwellings’.

Cheshire East has promised that in 2017/18 completions will exceed 2,000; but in order to meet its five year land supply targets this would need to be in excess of 3,000.

The story has been picked up by media outlets across the North West, including BDaily, Place North West, the Crewe Chronicle, Nantwich News and the Macclesfield Express.

The Council released a statement claiming that applications went to appeal because it ‘opposed speculative, sporadic development’ – but did not address the fact that the applications were subsequently granted, and were therefore deemed suitable and sustainable.

Nor did it address the fact that it had claimed credit for granting applications it in fact refused.

Our chief executive Colin Muller said: “Cheshire East put out a press release claiming it is ‘more than pulling its weight’ to ease the national housing crisis, when in fact it is doing nothing of the sort.

“For the Council to claim they granted permission for over 20,441 homes is a gross misrepresentation of the facts – if they had their way there would be at least 4,300 fewer homes in the pipeline, and the housing situation would be in an even worse state than it is now.” 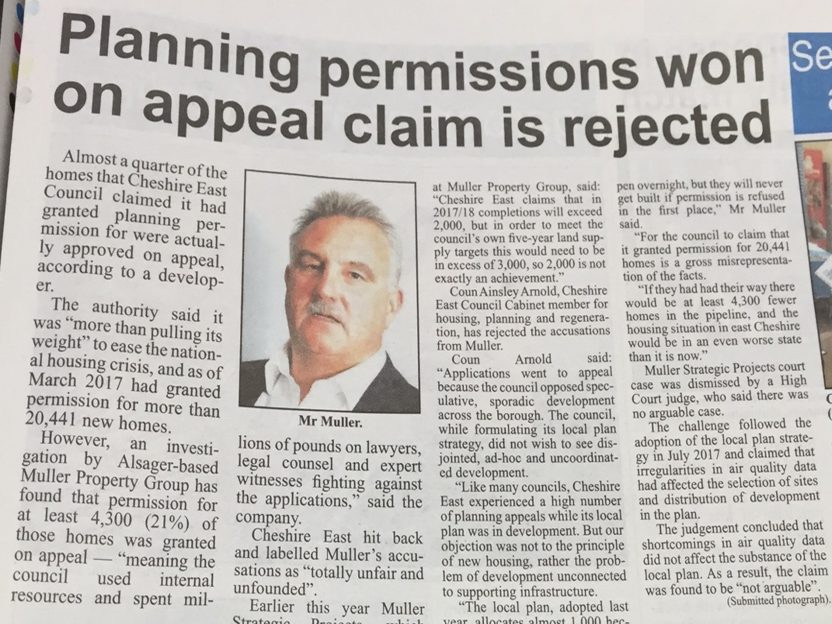