Colin Muller invests as much time and effort into getting planning for my land as I do farming it.

To maximise the value of a property development, you need an expert you can trust. That’s why Muller are the perfect partner.

If anyone knows their way around creating high quality accommodation, it’s Colin Muller.

UNLOCK THE POTENTIAL OF YOUR LAND

Muller are experts in property development, project management, property investment and land assembly and are strategic promoters of land for the creation of new areas of sustainable community and enterprise.

Muller Property is privately owned and, as such, we are agile, proactive and forward thinking. We also take a hands-on approach.

Our team is highly experienced and under the leadership of Colin Muller, offers a highly personalised service which delivers results for the landowners with whom we work. Muller Property has significant investment in a large number of land assemblies across the UK and is actively involved in the promotion of land for long term development via the planning system.

Muller has a proven track record in obtaining planning consent, even on difficult and complex sites. In fact, 25 of our last 26 applications have been successful.

Muller works across the entire country, identifying and promoting land and development opportunities anywhere in the UK.

We cover the costs

Muller shoulders all the risk involved, covering all the upfront costs of land promotion and only getting paid when the land’s sold.

A team of experts

Our highly experienced team is skilled in getting planning permission on farm land, also having specialist expertise in town planning and land assembly. 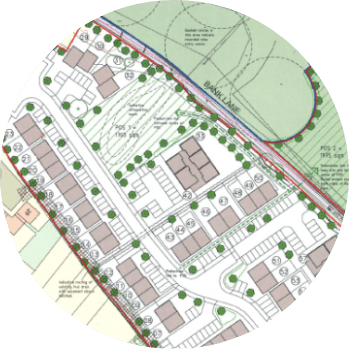 No silver bullet when it comes to planning permission


One of the key things to bear in mind if you are thinking about attempting to obtain planning permission for housing on a piece of land is how important it is to be proactive about it. If you have land you think might be suitable for development, such as land on the edge of a […]


Muller Property Group has submitted a planning application for a retail and residential scheme in the centre of Sandbach within the town centre. Under the proposals submitted to Cheshire East Council, Muller will re-develop a current brownfield site on Brookhouse Road, adjacent to the town centre’s popular Waitrose store and Post Office, to create 6 […]

Does the Planning System need reform?


Last month, I wrote an article that was featured in Farmers Weekly. It focuses on the six main steps that landowners need to take if they want to gain residential housing consent for agricultural land.  We have produced significant results by achieving land allocations and planning approvals for employment, housing and community uses which can […]


1st October 2019 Colin Muller, Chief Executive, Muller Property In this article, Colin offers to farmers and landowners his view on how Brexit will affect UK agricultural land values generally and on how it might affect the value of agricultural land for housing development. There has been a lot of media speculation about the effect […]


A double-page feature that focuses on advice from Colin Muller has appeared in the September edition of the CLA’s magazine, Land & Business. Colin uses the feature to emphasise the importance of early action by farmers and landowners who are thinking about offering their land for housing or employment developments. Here’s a summary of the […]


An article featuring the views of Colin Muller was published in the August 23rd edition of Farmers Guardian. Colin had been invited by Business Reporter, Alex Black, to comment on how farmers and landowners can gain planning permission and realise the full potential of their land for the magazine’s summer Property Special. Here is a […]

Localism: a charter to prevent development?


Rebecca Muller, Land Manager In November 2011 the Localism Act was introduced in order to challenge the central government driven decision-making process and devolve power to local level government. In theory this was supposed to be a forward-thinking move that would help build and shape communities in a way that would benefit the people who […]

Meeting the needs of an ageing population


Jonothan Croft, Land Director In a previous article, we highlighted the pressing need for more suitable accommodation for the ever-increasing elderly population. So, what are the key solutions available for this group? Sheltered housing geared for the active person over 55, who wants to live independently but may need a bit more support from time […]


The Housing Delivery Test: What is it and what does it mean for landowners? Colin Muller, Chief Executive Land and planning, particularly for housing, feels like it has enough measures, metrics and policies attached to it. From the NPPF to local planning policies, from 5 Year Housing Land Supply to Objectively Assessed Housing Need, there […]


The submission of our latest masterplan for our Houndings Park development in Sandbach has been covered in the Crewe Chronicle, “Town masterplan that could bring 300 jobs submitted”. If approved the plan would create 300 jobs for the town. Our proposals include a BP petrol station, M&S Simply Food, Lidl, KFC, Costa or Starbucks, Subway, […]

Can my land be developed?


Colin Muller, Chief Executive, Muller Property In this article,Colin offers advice on farmland development and strategic land promotion to farmers and landowners who want to get the most out of their land. The location of your land is of critical importance when it comes to assessing the prospects of whether there is any possibility of […]

A difficult future for an ageing population


An ageing demographic means that finding suitable accommodation for our elderly population is already a problem, and is predicted to grow even more difficult in the future. The population of England is projected to grow by 4.1 million (7.5%) by mid-2024. However, the most rapidly growing age group is people aged 65 and over. This […]


In the latest edition of CLA Land & Business magazine, Colin Muller, Chief Executive at Muller Property Group, talks about the growing list of demands being made by UK councils regarding land development, the difficulties this is causing and what applicants can do to improve their chances of success. In the past, landowners have traditionally […]


Muller Property Group has announced a duo of new appointments to its senior management team in a bid to drive its future business growth plans. Jonothan Croft and Richard Lawrence have been appointed as senior members of Muller’s Land Acquisition Team to deliver the Group’s long term plans around strategic land promotion, sustainable house building […]

Could a new land tax be imminent?


In October’s article for Farmers Guardian magazine, Colin Muller, our chief executive at Muller Property Group, warns of whisperings within parliament of a potential new land tax.The last time a land tax was introduced in the 1970’s, it was very short-lived as the supply of new land for development dried up overnight – no wonder […]

Colin Muller laments the rise of the Nimby


During August, Colin Muller, chief executive at Muller Property Group, shared his views on the negative impact Nimbys are having on land development in Farmers Guardian. The ‘not in my back yard’ phenomenon has grown out of the introduction of the Localism Act in 2011.  It was intended to encourage local people to participate in […]


Earlier this year our chief executive, Colin Muller shared his thoughts on navigating the complex and often confusing world of obtaining planning permission with readers of CLA Land & Business magazine, many of whom are farmers or landowners. Colin stressed the need for landowners to plan for the future and be proactive if they want […]


In a recent article in Farmers Guardian magazine, Colin Muller, our chief executive at Muller Property Group, explained how landowners can assess the prospects for possible development of their land. According to Colin, anyone wondering if their land could be ripe for development should start with the Council’s Local Plan. Most local policy tends to […]


Muller Property Group has secured overall planning for 149 homes in Ansley on land north of Nuthurst Crescent. This follows two successive appeal hearings against North Warwickshire Council over the site’s separate housing phases. Outline permission for phase one, up to 79 dwellings, was granted when the local authority lost an appeal in January 2017. […]


Muller Property Group are planning to put forward proposals and a formal outline planning application to Flintshire Council that will deliver much needed new homes in Drury. The developer is looking to build 66 homes on the site to the north of Drury Lane, which extends to 4.3 acres and is within easy reach of […]


Muller Property Group has been making headlines recently after revealing some disturbing facts about Cheshire East Council’s interpretation of its own housing figures. The local authority put out a press release claiming credit for granting permission for more than 20,441 new homes, and stating that housing completions have ‘risen year on year’. However, an investigation […]


Last month our chief executive Colin Muller spoke in Farmers Guardian magazine about the complex processes behind obtaining planning permission for a piece of land. Colin was keen to get the message across that there is ‘no silver bullet’ – the process is time- consuming and expensive, and if someone has a piece of land […]


In the second of his submissions to Farmers Guardian magazine, our chief executive Colin Muller talked about the debate over whether planning decisions should be made by central government or local authorities. This is a debate that has been raging since the first planning act came into force 71 years ago, but Colin says in […]


An application was submitted for 70 dwellings in October and is due to be heard at Committee on 3rd January 2018 The proposed development site is in an area of approximately 2.20ha (5.4 acres). It is 1km north-west of Loggerheads Village Centre and situated immediately north of Eccleshall Road which connects Mucklestone Village and Loggerheads […]


On 3rd August 2017, the Secretary of State issued a letter reopening the inquiry into Muller’s potential 1,100 home ‘village’ proposals at Nantwich….


In March 2014, the appeals submitted by Muller on land to the south of Nantwich were called in by the Secretary of State and were later dismissed in March 2015, despite the Inspector’s recommendation for approval.

Looking to get planning permission on your land? Talk to Muller.

We want to help you! Get in touch now by submitting your details. Or, alternatively, call us freephone
on 0800 7880900 or email us at muller@muller-property.co.uk